Whilst growing up, Jasper always had a cat – I didn’t. No, my array of pets were: a dog, some fish, two turtles, and a chihuahua at my dads side of the family. But a cat, never.

To me, although cute, cats are kind of scary too. Very self-minded, and can not always act completely predictable – like a turtle, haha. Anyway: we’d been talking about getting a cat for a while, and we both got excited at the idea of having a cat around.

So, a few weeks ago, Jasper was browsing Marktplaats and came across this post from a daughter of two elderly people: a new home wanted for Snuitje. It’s an 11 year old cat, and has always lived with us. Her parents were moving into a nursery home, and although they were allowed to take their pets with them – they didn’t want to bring him from a stand-alone home, to a second-floor apartment. So, we called and made an appointment to meet with them. They wanted some time to think about it after we left, and surely: one hour after we left they called us: if we wanted we could adopt him and pick him up the very next day. Their son offered to catch the cat, as that had turned out to be a challenge previously. They told us that they’d previously transported him with a laundry-basket, and wanted to do that this time too – it sounds very sad, but worked okay-ish.

We brought the cat home, and he had a bit of an adjustment period – but was quicker in adjusting than we’d initially thought. Saturday he didn’t want to even acknowledge him, but by Sunday evening my mom was petting him (we were out for dinner with Jaspers family). The rest of the week he was getting balsier and balsier, which was a fun process to witness.

So, you probably wouldn’t guess it: we’d had the cat for like 9 days – and then he escaped. We thought he might come back on his own that evening, but didn’t. We spend 5 days looking: calling the old owners, even spending an evening in their home to see if he’d pop up. I still think I saw him two days after he went missing, but he ran away too fast to be sure. After 5 days, we’d sort of given up – we spent most of the days searching him, but had no success. Then when we got back from seeing a movie with my mother, she spotted him casually sitting on the roof. Yes, our freaking roof! What are the odds of that happening!?

Getting him inside proved to be a challenge on its’ own that we spent an hour and a half on: luring him with food, water, talking to him – nothing seemed to work. We could notice he was very hungry, as he’d react to the food in trying to get some, but scaring away when cars or cyclists drove by. Then, when we’d lost sight of him, and went to check under our cars, I threw a quick look inside; he was already eating there. I thought this was hilarious, he just sneaked in while we were looking for him. Anyway, ever since he came back he’s been extremely loving and seems happy to be here.

Do you own a cat? Or another pet?

Check out another article here!

Date: a day in the dunes 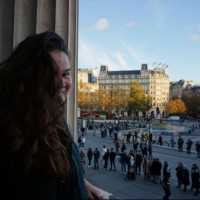 My name is Denise, and I am a 21 year old Business Innovation student in the Netherlands. I started this blog in 2019, because I wanted to share some of my life with others.

Together with Jasper, my boyfriend, I go on epic adventures (13 countries in 3 years) - and I would love to share them with you!

Other than that I love talking about my favorite tech, my travels, home and lifestyle.